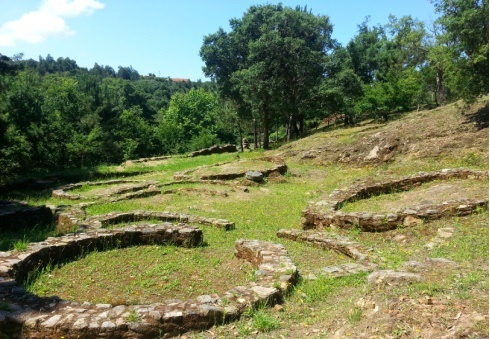 This case is an example of a project of valorisation of a cultural space, specifically the Castro de Ovil, inserted in a natural area, as an evocative or propitiating place of memories (recovered / recreated), as well as a natural space of usufruct and leisure activities. This is an example of an approach to the valuation of an “Archaeological Site”, in an integrated perspective, complementary to other interventions programmed, carried out or in progress, executed by the Municipality with the support of other entities and participated with the involvement of citizens in its construction, can change the visibility of a place and motivate the citizens’ interest in it. Even with reduced investments (at the level of operation and maintenance) and small actions it is possible to value an Archaeological Site, enhancing its cultural, industrial and natural value of the place.

It represents a settlement of the Iron Age, integrated in the denominated culture of the northwestern peninsula, where the human occupation from at least the 3rd century BC to the contemporaneity has been documented. It integrates an industrial mill, constituted by the ruins of a Paper Factory Castle, installed there since the 2nd quarter of the century. XIX, and that worked until the decade of 1970. All this inserted in a natural space, marginal to the river «Rio Maior», where it has constituted the concern of the Municipality to proceed the gradual elimination of the monoculture forest, favouring of the indigenous vegetable species.

In 2006, the Municipality presented an application for community funds in connection with a project for the Valorisation of the Castro de Ovil, budgeted at approximately 5,000,000.00 €, which provided for the construction of an Interpretive Center, with various capacities. In view of its non-approval, the Municipality opted for a phased implementation of a (simplified) project consisting of small interventions in the area (costs approximately 300,000). It aimed to return the “site” to the usufruct of the citizens and to involve them in the decision-making process throughout the execution of the same, to promote the usufruct of the space in the slope of leisure, through a cycle path, of connection to the sea.

Through the improvement of access to the site and the construction of routes and signage, accompanied by a work to promote the site, it was possible to increase the notoriety of the place and the interest of the citizens in the cultural and playful aspect of the use of space. The introduction of the Castro in the natural route of the county, aroused the interest by the place and an increase of visitors.

It is an example of a case for the sustainable (economic and environmental) and integrated approach.
We opted for a project with low operating and maintenance costs, in order to ensure the economic sustainability of the project. On the other hand, given the high natural and scenic value of the fauna and flora where the Castro is inserted, it was also decided to make light interventions, without major impacts on the landscape, through the choice of natural materials such as wood in signage and in construction of footpaths.
The implementation of the Castro Valuation project also involves an integrated implementation network that includes, in addition to the severel departments of the municipality, other institutions / entities, specifically Cré.Porto, an institution led by AMP and the Catholic University responsible for planting trees of traditional forest, in order to return native species to the site. It also includes the Municipal Museum of Espinho, guardian of the collection collected in Castro’s research, which is equally important in the valorization, promotion and promotion of the Archaeological Station and its estate.

It is a participatory project that involved the collection of contributions from institutions / entities that make up the ULG, as well as those from the Urbact project, from the residents who visit the site.

The phased implementation of the project allowed the process to become more involved, as it allowed to create a closer approximation with the resident community and in particular with the members of the ULG. Through the ULG meetings and the site visit with its members, held after the first phase of the work and the preparation of the 2nd phase, it was possible to collect several contributions from the various institutions/entities that makeup, in order to validate or reorient the strategy below.

There has been a change in the attitude of the local population towards Castro de Ovil. As a result of the greater dissemination of the “Sitio” and the small investments made there, there is an awakening of the social communication to the place, translated in a significant number of news, in local and national newspapers.
This shows a greater demand for the site, hitherto unknown by a large part of the local community, and therefore a greater number of visitors and guided visits to its “site.”

Small and small projects can have major impacts on local visibility and greater citizen involvement. As integrated projects with involvement of other entities / institutions and partnerships with citizens can be effective and more accepted by the resident community.