2. THE REHABILITATION AND REVITALIZATION OF THE PRINCELY PALACE (THE E BODY) – ALBA IULIA MUNICIPALITY 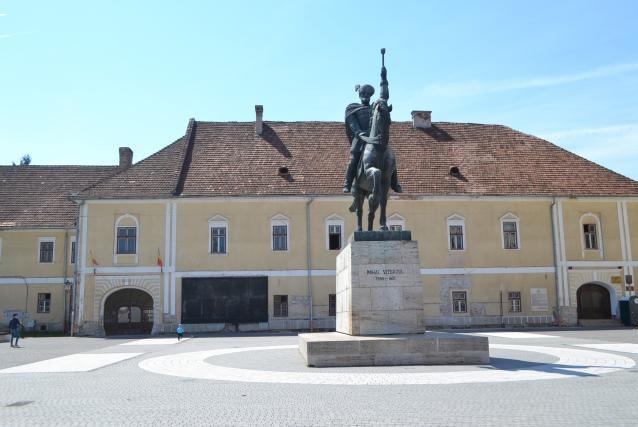 FROM signing the financial contract with the Managing Authority, TO finalisation of the public acquisition procedure for the selection of the constructor.

The construction of the Princely Palace, which started in the middle of the XIVth century, was made on the settlement of the former bishop palace. The process of the construction was realized in successive stages and the maximum development was reached in the XVth century, when the wings of the building were developed along 3 inner courtyards. During the Habsburg governance, several functionalities are assigned to the building: the eastern part becomes a military barrack, the western part is transformed into the Roman-Catholic residence of the bishop. From the beggining of the XVIIIth century it becomes a military building.

The rehabilitation and revitalization of the Princely Palace, the main measures taken into account refer to the rehabilitation of the E body within the building, according to the existing specific legislation concerning historical monuments. The project covers specialized intervention works upon the artistic, archaeological and architectural components of the building. Concerning the rehabilitation of the Princely Palace, the financing contract was signed, in May 2017, with the Managing Authority of the Regional Operational Programme 2014-2020. From this point (May 2017) until the official start for the public procurement procedure, Alba Iulia Municipality prepared all the documents needed for the file, according with the national legislation, and sent this file at National Agency for Public Procurement (governmental Agency), who had to verify and validate the procedure. After all this official procedures the public procurement was published at the end of November 2017. The deadline for submitting offers was January 2018. There have been submitted 3 offers, but none of them were admissible from technical point of view. This measure was in concordance and possible, according with our national legislation.

Cancellation of the award procedure was followed by appeals from those who submitted offers and in the end of May 2018, the Municipality was allowed to reopen the public procurement procedure by the National Agency for Public Procurement. This time, the deadline for submitting offers was end of July 2018. There have been submitted 5 offers and at the middle of November 2018, has been declared winner a private company, SC EURAS SRL – which is one of the most representative company in the field of restauration in Romania. The contract with this company was signed at the beginning of December 2018 and the works for restauration of the Princely Palace started in the same month.

The project proposes a local investment that generates a regional, national and European impact, by making use of an historic monument, included in the national historical monument list. The Palace is located in the Urban Site ”Alba Iulia Fortress” an important architectural complex.

The major objectives of the project are the conservation, restoration and sustainable use of the Ensemble of the Princely Palace in Alba Iulia – Exhibition Center Main Body ‘E’ in the surface of 3113.64 square meters, through consolidation, preservation, restoration and interior decoration, exhibition facilities for sustainable use in accordance with its historical status and with national and European valences.

The focus group of the project is:

Alba Iulia Municipality has an Integrated Urban Development Strategy for 2014 – 2023 which covers as well the cultural management of the city and the cultural development at short, medium and long term (http://www.apulum.ro/ro/pdf7/SIDU_-_versiune_consolidata_august_2017.pdf). In this Strategy Alba Iulia is projected to become a city for tourists, a city for citizens and a city for investors in 2023. This is the main one to refer to during the INT-HERIT Project.

Portfolio of projects needed to achieve the vision and achievement of The Integrated Urban Development Strategy objectives are interconnected. The quality of life and the harmonious development of Alba Iulia is conditioned to a significant extent by the level of development of transport infrastructure, public utilities, education, research, health and social infrastructure. Territorial cohesion, a complex concept, with particular reference to balanced territorial development, the reduction of disparities between different areas and the exploitation of territorial potential, is one of the main concerns of the European Union. The city of Alba Iulia will also have the role of Center of polarization of the economic and social activities for the localities in the neighbouring area.

For the implementation of this action, it was necessary to create a partnership (in order to apply for the Regional Operational Programme 2014-2020), in which:

Other actors involved in this Case Example:

The starting point of the works is very important for the building itself. The project will highlight the remains of the Principality, until the middle of the 17th century, during which Alba Iulia was the capital of Transylvania, but will also take into account the construction phases and the artistic components that must be preserved in situ of the other epochs: Roman, Medieval, Renaissance, Baroque. All the studies necessary for the project development were the result of a comprehensive partnership of the City Hall of Alba Iulia with all the factors described above (historical study and history of art, parament, archeology, geotechnics, biology and technical expertise).

The arrangement of the spaces for new functions will be in line with the historical, architectural and volumetric possibilities of the construction. Proposals will mainly target:

Consolidated, restored and equipped facilities according to the proposed functions are to be introduced into a local, national and international cultural circuit on the one hand and on the other hand they will define the Principality Museum as an institution open to urban space.

The Princely Palace is an important architectural complex, located in the wider ensemble of the Alba Carolina Citadel. The history of the palace includes many stages of construction – the Roman era, medieval, Renaissance, baroque, the 19th century and the 20th century – with rebuilding, reconstruction and refunctionalisation works, all connected at the same time to the urban neighborhoods. There’s a good part here from the history of fortifications (Roman and Medieval) in Alba Iulia and the history of several institutions with major importance in the history of Transylvania.

The functions proposed by the project are cultural and are considered by the specialists, right for the building as a historical monument and will also attract as many tourists as possible. In the long term, the project will bring a plus value on all levels, from cultural, commercial, tourism, food, publicly, locally and subsequently to economic and cultural development at county, regional, local, national and international level.

Through the project there are also designed levers which aim at the constant increase of the number of visitors after the restoration of the main body of the Palace: from about 2,000 now, to 26,000 after the first year of project implementation and over 60,000 after another five years.

The preparation of the project started in 2014. In 2016 the project was submitted for evaluation and in may 2017 was signed the financial contract with the Managing Authority of the Regional Operational Programme 2014-2020. After a long process of evaluation (preparing the public procurement procedure and validation of this procedure, solving all the appeals regarded to the procedure by the National Council for Solving Complaints), in December 2018, the Local Authority, was able to start the works of restauration and rehabilitation of the Princely Palace. This process will last until July/August 2020, according to the financial contract.

The budget for the Princely Palace project is: