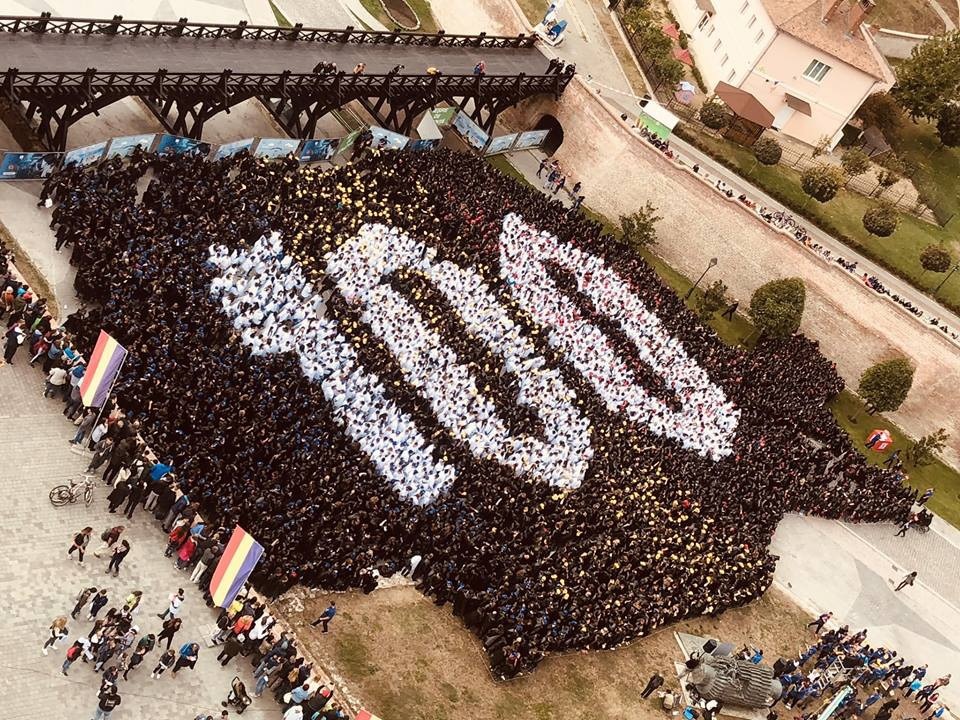 This autumn, on September 29 and 30, the 11even Association of Cluj-Napoca, together with the City Hall of Alba Iulia and Kaufland Romania, organized an exceptional festival – Joy in Motion – involving the community from the city of the Union during the 2 days in games, contests and activities involving the movement.

Because in 2018 we celebrate 100 years of the Great Union, we thought to mark this festival with a special event. We gathered thousands of people from Alba Iulia and other communities from Romania and together we have formed #CelMaiMare100 (#TheBiggest100). This event was held on the first part of September 29 in the Joy of Movement Festival and we benefit from the presence of an evaluation team from Guinness World Records to confirm this world record.

Guinness World Record has recently published the latest record shot down in Alba Iulia, “The largest image of people in a country / continent”, in which 4,807 people recreated Romania’s map, having the number “100” in the middle, on September 29 , on the West Side of the Alba Carolina Citadel.

#Thebiggest100 was not only able to break down the world record for the largest map of a country of people but also the record of volunteers who have ever been involved in an event organised in Alba Iulia, more than 300 volunteers were engaged for this action. One of the greatest impact of this action was the capability to mobilise thousands of people around cultural heritage in cultural actions: 4,807 children, youngsters and adults from 67 localities across the country arrived in Alba Iulia on Saturday to enter Guinness World Records with the largest map of a country of people at a special event. Inside the map of Romania made up of people was created the figure 100 as a sign of respect for the Great Union of 1918.

During the event, activities for children and adults were organised throughout Alba Carolina Citadel. Thus it was an opportunity for all those presents, locals and people from other parts of Romania, to discover the unique cultural heritage of the city of the Union.

The event was organised by The 11even Association of Cluj-Napoca, together with the City Hall of Alba Iulia, Kaufland Romania and Student League of the University December 1, 1918 from Alba Iulia.

The 11even Association was born in Cluj-Napoca in 2012, from the desire of people with experience in the business, journalism and event organisation, to support various community causes through beautiful projects carried out in several communities in Romania. They have created the Joy in Movement project in Romania, in which they believe that communities that participate in sports and recreation develop strong social connections, are safer places, and people living in them are generally healthier and happier than communities where physical activity is not a priority. Only at the 2017 edition of their program, over 75,000 children, parents and grandparents participated in 1,500 outdoor activities in 12 cities with the support of over 1,000 volunteers.

Municipality of Alba Iulia prepared the 100 figure project together with Str?jan Design Office from Alba Iulia, which covered the entire plateau area of the ditch area around Gate IV of the entrance to the Alba Carolina Citadel.

Kaufland Romania was the main sponsor of the event, together with the City Hall of Alba Iulia.

Student League of the University December 1, 1918 from Alba Iulia was represented by Andreea Cordon, student at Alba Iulia University, who took over the coordination of over 300 volunteers to form #TheBiggest100.

In order to achieve its main goal concerning these world record event, the Municipality established partnerships with relevant actors such as representatives of the cultural NGOs and associations, students from the University, from High Schools (local and from other cities), with the economic domain (entrepreneurs, private entities etc.), decision makers within the local and central public authorities.

December 1, 1918 took place the Great National Assembly in Alba Iulia, which popularly legitimised the union of Transylvania and Banat with the Kingdom of Romania. In 1922, in Alba Iulia, the official ceremony for the crowning of the Kings of Great Romania, Ferdinand I and Maria, also took place in the city, which granted the symbolic importance of the city due to its role as a historical capital.

In the year of the National Centenary, organising the #Thebiggest100 – “The largest image of people in a country / continent”, in which 4,807 people recreated Romania’s map, having the number “100” in the middle, in Alba Iulia, was a great opportunity to bring back our national identity in the heart of the people, especially in the heart of the youngsters. Also was a great opportunity to promote the Alba Carolina Citadel as the place of our unification and our national pride and identity.

The young people who took part in this event had two great opportunities:

The promotion of the Alba Carolina Citadel through this event was positive and had a great impact in local and national news, and had even an international impact by publishing an article on Guinness World Records official web site

For Alba Iulia, organising such event/s, was a great opportunity to promote its local values such as cultural heritage, involvement in social activities, partnerships with different stakeholders and national identity. The most important thing was that through these events we managed to bring together different kind of people – from the city, from other parts of Romania and also tourists.