2. Co-creating solutions for the sustainable management of Baena Castle. 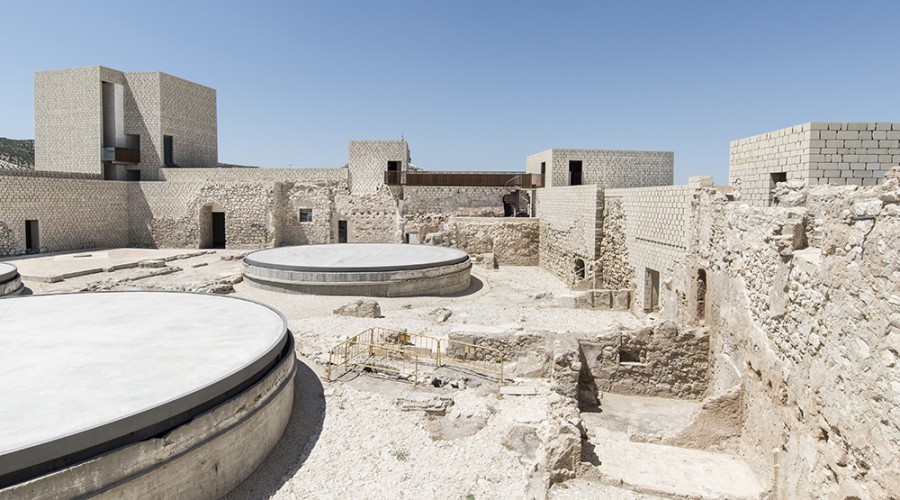 The Castle of Baena is an important historical resource of the city which has undergone an important range of structural interventions. Taking place from 2005 to 2015, they have returned the Castle to its original volume, therefore creating new spaces. The lack of resources since then has compromised the completion of the improvement actions, being also necessary to define more in detail the monument use and management model.

Between 2017 and 2018, within the framework of the INT-HERIT project, there has been a participatory process in which some solutions for these outstanding needs have been designed. In addition, some pilot actions have been tested and some technical reports, a proposal for a regulation of uses for the monument and several communication materials have been developed. All of it has contributed to helping local decision makers in the municipality to build up a new integrated strategy for the Castle.

The implemented interventions together with the described participatory process highlight the important role of the municipality in terms of ‘heritage management’, which is not exempt from shortcomings or difficulties, specially considering the case of small cities. The civil engineering works, to a value of more than EUR 4.000.000, was possible owing to financial support from the Ministry of Public Works and Transport for 75% of the total project cost. The economic crisis and the need to offer more sustainable solutions to the management model have fostered the introduction of this participatory approach which, together with the technical proposals and the pilot activities, have brought useful results to answer these needs. This has determined the design of new solutions that while complementary or alternative, have facilitated the decision making process and the implementation of the preferred solutions among the proposed ones.

The City of Baena, as the owner of the monument, has been responsible for the organisation of this interventions, ensuring the necessary vertical integration with other concerned institutions such as the Ministry of Public Works and Transport and the Andalusian Regional Government Department for Culture, as well as the integration of several local departments and services. Likewise, the intervention of local stakeholders has also been facilitated through three specific sessions of the Local Urbact Group from the INT-HERIT Project and a peer review session on the Castle with the participation of all the transnational partners of the project. Different proposals and instruments for the management of the site have been developed around three different types of measures:

Together with the members of the Urbact Local Group and the international participants during the transnational meeting of the INT-HERIT project held in Baena, professionals and political representatives of the Council have been invited to participate in this process as well as other stakeholders who have been consulted and involved to various degrees. Thus, private entrepreneurs involved in the implementation of the civil engineering works, as well as in testing some other occasional activities (concerts, photo reports, cultural events, gastronomic tastings…) have actively participated. At the same time, some professionals have taken part in the design of new projects and reports and also some cultural associations and groups have organised different activities connected to this heritage site.

Difference that has occurred. Changes in the results indicator.

The main difference has to do with the preservation and conservation of the site itself as well as the integration and revitalisation of the surrounding area.

The necessary cultural endowment and a proposal for a rich, flexible and differentiated range of uses have been defined on the basis of the analysis of necessities, viability and risks, all through a participatory approach.

The testing of some pilot activities has allowed a suitability and feasibility evaluation to decide on a future systematic implementation.

Regulatory proposals for activities and services have been created and discussed, considering complementarity, management needs, costs and prices, among other management elements.

Significant progress has been made in the citizen dynamics of esteem, identity and appropriation of the cultural heritage of the municipality.

Interest to be used by other European cities

Problems in cultural heritage management are common to small and medium-sized European cities, from making decisions regarding investment to the management model or the public use strategy.

The case highlights the importance and the opportunity to promote participatory processes no matter the moment in the project’s life cycle.

Furthermore, it proves the interest in adding new innovative initiatives in a flexible and complementary manner, allowing for the redirection of the initial plans when these are proved unfeasible or unsustainable.

A cocktail of simple regulatory rules for public use combined with small pilot actions and the development of basic technical reports, as well as effective communication proposals can contribute to the launching, even if temporary, of resources that require complex and costly interventions.

Preparation date of this Case Example

Responsible for its preparation

Other contributions in the framework of the INT-HERIT Project related to staff costs and technical reports.