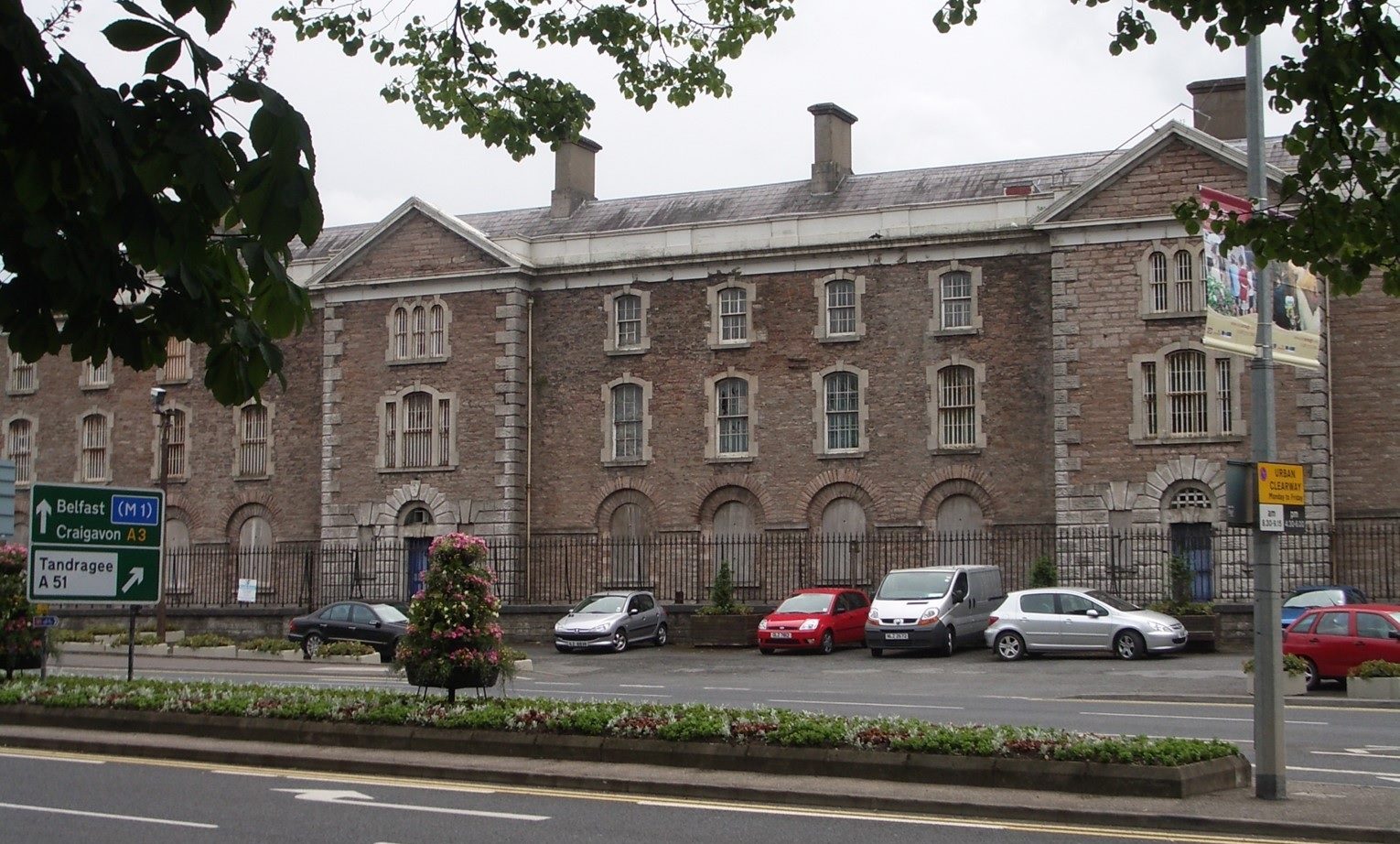 Armagh Gaol was established in the late 18th and early 19th century by the former Archbishop of Armagh and primate of Ireland, Richard Robinson. It sits on one end of Armagh’s historic mall and faces another important and rather austere institutional building of the Court House. The court house is still in active use and was designed by local boy Francis Johnston, opening in 1809. The Gaol, designed initially by Thomas Cooley, was much extended in the 1840s by William Murray, but closed in 1988 and has lain vacant ever since. It has been described as a “handsome three-storey fourteen-bay building of coursed conglomerate with rusticated limestone quoins“. Its front block was built in two stages and contains two break-front gabled bays.

To the rear, two cell blocks radiate from a central corridor block, whilst an earlier two-storey infirmary building stands alone in one of the yards. Nineteenth century railings enclose the complex to the front whilst a tall perimeter wall envelopes the other three sides. The building is owned by the local municipality and what will hopefully emerge over the coming years is a mixed-use conservation scheme including sympathetically designed new buildings, with hotel, residential and heritage interpretation uses, and guaranteed public access.

This solution offers an approach to addressing the challenges of collaborative working between the Public and Private sectors. The Osbourne Group, who have previously refurbished the former prison in Oxford England, have been selected through a competitive process to work collectively with the municipality and the Princes Regeneration Trust, to convert the building into a tourism and accommodation facility that will offer a high quality experience in the city, which currently isn’t on offer.

A significant tourism opportunity lies in wait for Armagh and our ongoing research informs us that the provision of high quality tourism accommodation is absolutely required to enable the city to completely take advantage and capitalise on this opportunity. Armagh has been recently recognised for excellence in the evening and night time economy and is regarded as the religious and ecclesiastical capital of Ireland, drawing significant influences from its Georgian heritage.

This is a product that people will want to see and travel to witness and the provision of a suitable quality of facilities for the city is critical to the continued development of Armagh’s tourism offer and its evening economy. The property in question has been vacant for a number of decades and with every year that passes, falls into even more significant state of disrepair.Addressing this disrepair and creating a meaningful and sustainable use for the property can lead to wider benefits for the city and its population through new jobs and career opportunities.

The current proposal will be funded by a plethora of funding agencies and has the support of the local community which has been tested at various consultation events. The local business community are supportive of the proposals in principle and appreciate the potential for spinoff benefits to all businesses across the city. The municipality is keen to ensure that all views are taken into consideration thus have been working with the proposed developer to review the existing plans with a view to ensuring that they get maximum support from the community in the immediate area of the Gaol. The Gaol redevelopment is a critical project in Council’s masterplan for the city which was arrived at through a participative approach with a variety of stakeholders.

Restoring old properties and buildings is a very costly activity and in recognition of this, Council and its partners have agreed to fund up to 80% of the costs of the project. Without the funding associated with the project, and the PPP approach championed by the Council, this property will continue to decline with little prospect of securing sustainable and viable uses for it, thus increasing the risk of them eventually being removed from the streetscape.

The Council takes very seriously its duty as a guardian of the important built heritage that has passed through generations in Armagh and this project will enable us to protect and enhance this important building and continue to build on the tourism offer in the city, whilst ensuring that the legacy of Archbishop Robinson is continued.

Restoration of this property will bring multiple benefits to the historic core of Armagh City Centre. Not only will the project address the continued decline of an important Georgian property, the project will create a multi-functional space that will be utilised to host functions (including conferences, seminars and weddings) and play an important role in bringing footfall to this part of the city.

Armagh is a City, like most Northern Ireland cities and towns, that suffered through the Troubles from a damaged reputation and an outflow of people from city centre residential and it appears that this trend is starting to reverse. We are also anticipating that the project will have a fundamental impact on our tourism statistics by increasing not only the number of overnight stays but also the average spend of our visitors which can create new opportunities for prospective entrepreneurs.

Date of preparation of this case example: February 2019

The project’s budget is in excess of £ 25m with about 80% of that already in place from various private and public sources. The challenge, in the absence of a functioning Government in Northern Ireland, is in finding the remaining 20% that is needed to realise the project.